Turkey’s Act of War: A Boiling Pot of Frogs and Hawks

Posted on November 24, 2015 by neithernoreithermore

The main US press and what Goggled News turns up about the Russian side of the story takes up 0 bytes. Oh, except for anything that might be interpreted as threats and “name-calling”.

US-led “ambivalent alliance” provocateurs have been encouraged by their ability to suppress the dissemination of information about Western-engineered terrorism and false flag massacres, or at least suppress the long-term memory of many episodes that briefly made the US press.

Amazingly, even the clamped-down Turkish press manages to convey substantially more than is available in the mass media hier bei uns. Main opposition paper Zaman, but also severely-hampered Hurriyet carried the gist of what Putin somberly pronounced during his meeting with King Abdullah of Jordan, including his accusations that, long story short, Turkey IS ISIS, and so is Turkey’s backer (he did not name US). But the Turks mostly know that. Also, I should clarify: The official Russian stance is that their fighter-bomber did not cross into Turkish airspace at all, but the Russians provide no maps, so provisionally we may stand by the Turkish story, whose map corroborates that of al-Jazeera I placed below, that the jet clipped a jutting peninsular corner for “17 seconds”, obviously heading out of the country again.

— Update to the update: Russia has released detailed radar footage of the entire event: it appears the Russian jet avoided Turkish territory altogether. Erdogan and Obama rely on this footage never seeing the light of day on their controlled mass media. 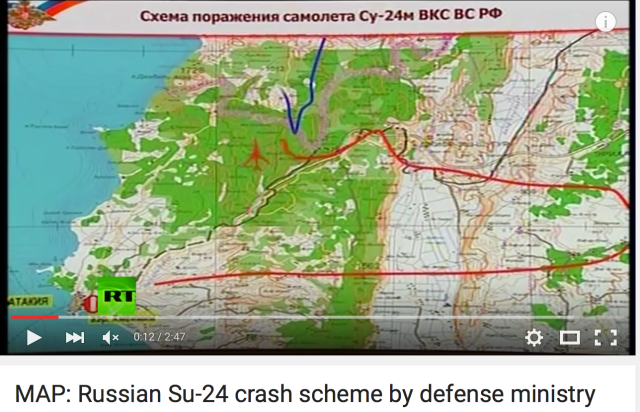 This screenshot map traces out a more detailed point-by-point radar path running later in the video linked. The Russian plane’s path is in red; that of the Turks in blue. The border is lightly drawn in beige, showing that the Russian plane did not cross into Turkish territory, but the Turkish plane possibly did cross into Syria. —-

Erdogan’s closest affiliates now entirely dominate his Cabinet. Anything but perfect monody is disallowed even within the AKP now. The propaganda war Turkey has been waging inside the country has not been picked up much in the US press. As the line goes, “the Russians are bombing the Turkman.” Indeed, the residents of some of these areas near Turkish Hatay are Turkman and true rebels among these too likely early had a decent gripe to make about Assad, but long have been made mercenaries to Erdogan and the “ambivalent alliance” firmly set upon one thing, the removal of Assad.

The Russian press is now also affirming what I suggested in the previous post was the most precipitous of reasons Turkey attacked. This was obvious really. In the last week, Russia destroyed 500-1000 ISIS oil tankers owned by Bilal Erdogan, so Daddy Erdogan had to hit back. This suggests that the US did not bomb the ISIS tankers it said it did. This was already likely, since PBS used Russian footage of their attacks for evidence of US attacks.

Commentator Gwyneth Todd judges this to be an “act of war”. Members of the Russian DUMA are calling for the complete and immediate cessation of diplomatic and commercial relations with Turkey — but nobody in Moscow has frothed at the mouth like McCain.  Nor have they demanded Russia do to Turkey what the Turks just did to them; nor again do even the opposition Communist members say they want to shoot down US planes flying from Incirlik as McCain and Lindsay Graham has explicitly recommended our proxies do: bring down a Russian bomber engaged in Syrian operations in Syria. This is the plainest of provocations.

Putin pointed out that Turkey called NATO to ask help before he called the Russians. “It was almost like we had shot down one of their planes in Turkey.” The one encouraging sign is that NATO so far has, of course, taken Turkey’s side, but proposed an easing of tensions. This is not the first time Turkey has conspired to devise an terrorist attack designed to draw NATO into war. PM Davutoglu, Turkish intelligence head Hakan Fidan, Foreign Minister Siniroglu, and others were “youtubed” in 2014, devising one such attack.

Will NATO hold back? Some seem more than willing to follow Turkey into the fray, if so far other members of the “gang” are considering their options. Sad to say, the week’s follow-up to the Paris attacks suggest France continues to be ready and willing to employ the tried and true methods of “Gladio”, the  NATO-CIA “stay-behind” program responsible for the Bologna train bombing massacre and other masterpieces of false flag terrorism. Per the research of Sibel Edmonds and others, this has morphed into Gladio B, a new brand, “Islamist”, with an old idea behind: to take down Russia.

France, whom Putin advised his military to treat “as” or perhaps “as if” an ally in their anti-ISIS efforts, which, for the French part, have been tiny in effect so far, despite a “first-day’s flurry” of attacks on Raqqa. Then Kardashian’s butt took over US news, but in fact, France followed up its attacks but once since, yesterday I believe. But elbows may fly too among the “ambivalent alliance” as they now scramble to carve up Syria while they have a chance. Turkey too wants  a chunk of Syria for its own “mandate”, or “colony.” (It is as much a farce to call Erdogan’s ambitions “Ottoman imperial” as it is to call the takfiri dupes, dopeheads, and mercenaries named ISIS “Islamic”. Obama is more a Sultan of the later Ottoman centuries in the sense he is isolated and dominated by “evil advisors” as Gelibolulu Mustafa Ali, Ottoman political theorist and bitter critic would say. But that’s my academe intervening.)

What does the US want? Well, US congresspersons have sold out in a half-dozen different directions. Not just collectively to Goldman-Sachs and the military-industrial complex, but individually to all the various, now contradictory strands of “allied” and not-so-allied, but plainly foreign lobbyists. (That used to be a crime; but then the Clinton Foundation needed its Chinese money, as now they need their Ukrainian oligarchs money.)

Of course, everybody is sold out to Israel. According to Cynthia McKinney, who alone confronted Donald Rumsfeld on the $2.3 trillion that he announced missing days before 9/11 —  and who was then drummed out of Congress by gerrymandering and intimidation — says that all newly-elected representatives are asked to sign a “I Support Israel” pledge, or face what she faced when she, evidently alone, refused to sign.

i am an historian of the present and past
View all posts by neithernoreithermore →
This entry was posted in ISIS, Masters of War, Russia-Turkey relations, Syria, Turkey downs Russian jet, Uncategorized. Bookmark the permalink.

2 Responses to Turkey’s Act of War: A Boiling Pot of Frogs and Hawks